Trinity Motorsports is driven by three core values: Service, Integrity, and Craftsmanship. We are passionate about custom cars and trucks and we are dedicated to treating the car enthusiasts of Pooler, Savannah, and Effingham communities with unequaled customer service. It is our mission to turn your vision of a custom car or truck into a reality while continually exceeding your expectations. Custom is what we do, specializing in Trucks, Off-road, & Performance.

Our 1,000 sqft showroom features a full 3-D wheel wall including the latest styles and best brands, lighting upgrade displays, performance parts showcase complete with fully assembled LS engine, dozens of display parts, 65-inch HDTV to show you how we can transform your ride, and customer lounge complete with complimentary drinks, HDTV, magazines, and Wi-Fi. Also on display in our showroom are the many magazine features we’ve been fortunate enough to be a part of. You’ll find our showroom to be different than any other in the area, as we want you to feel comfortable and enjoy your experience. We built our shop around you, so feel free to stop in and see how we can help you achieve your custom goals.

Performing all of our installations on-site, in the same facility as our showroom, we work in a 3,600 sqft two-bay shop complete with epoxy-coated floors for a cleaner working environment, two Challenger 10,000-pound 2-post asymmetric lifts, one Challenger 4-post extended alignment rack, and trio of top-notch Hunter machines, including HawkEye Elite alignment equipment, Road Force GSP9700 touch-screen balancer, and two Hunter center-mount touchless tire-mounting machines (Revolution and TC3900). We also have a complete fabrication area with welder, plasma cutter, drill press, hydraulic press, chop saw, band saw, and a full selection of Wurth hardware. In addition, we have a 35-ft wall of custom wheels and tires in stock, as well as the latest in TPMS tools, computer scanners, and specialty tools to work on even the most difficult applications. Also located in our shop is a NOS digital nitrous station to ensure your bottle leaves as full as it can be. 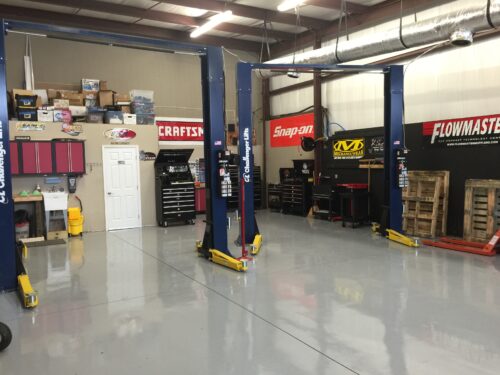 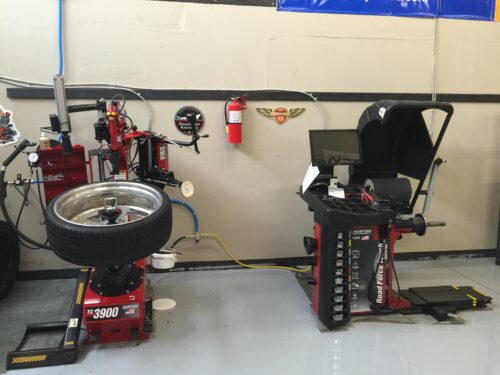 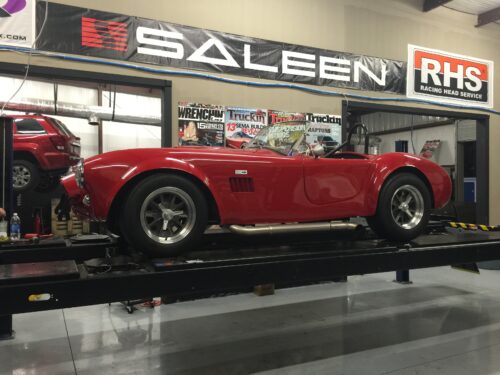 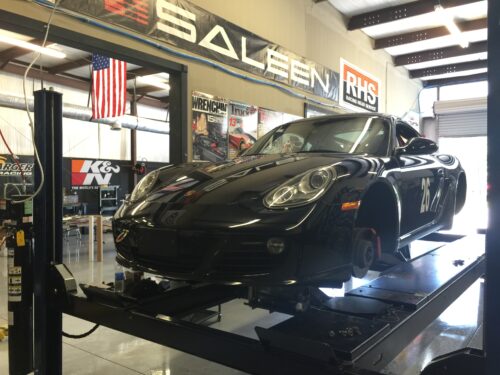 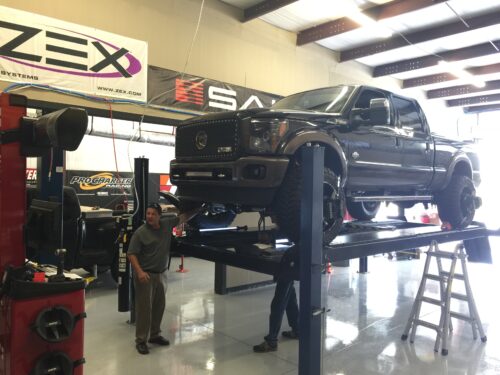 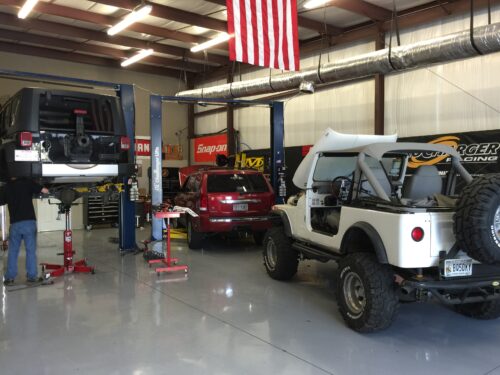 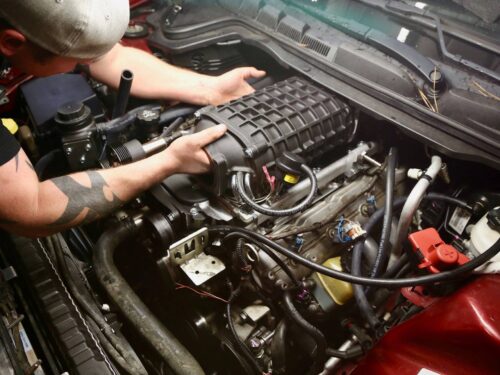 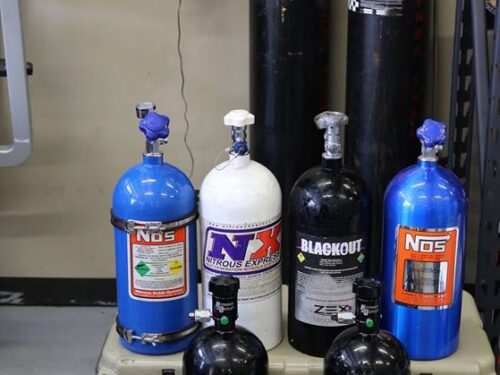 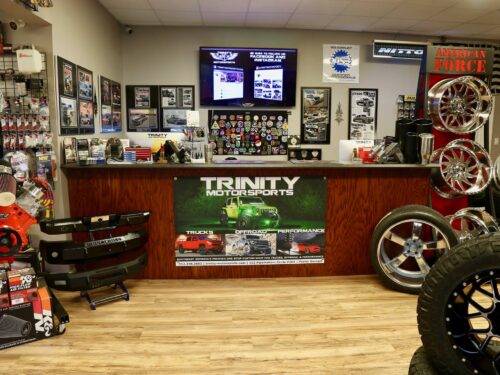 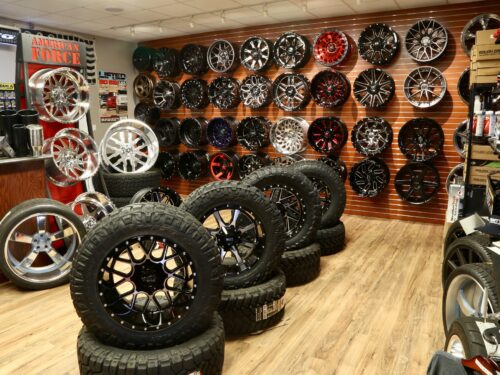 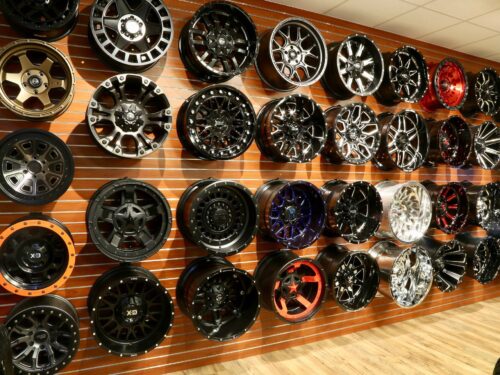 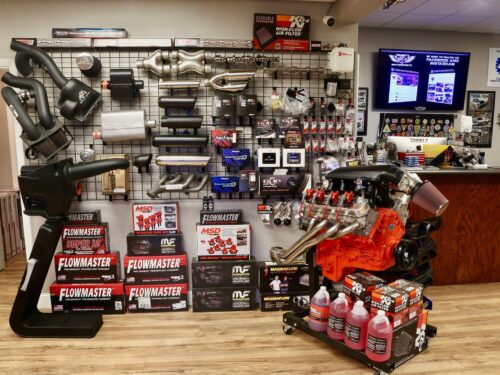 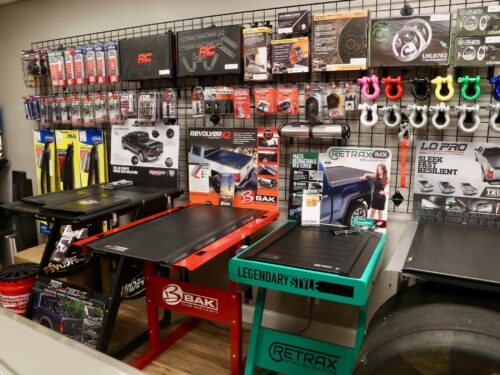 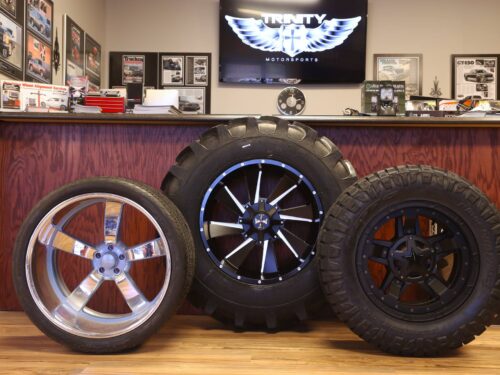 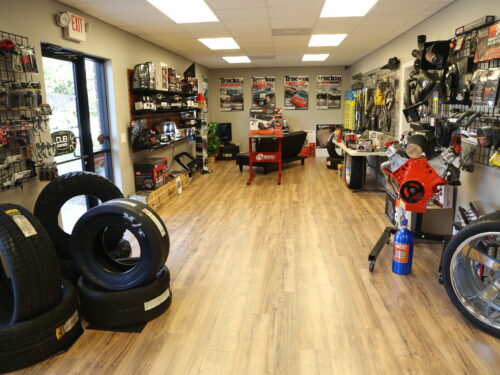 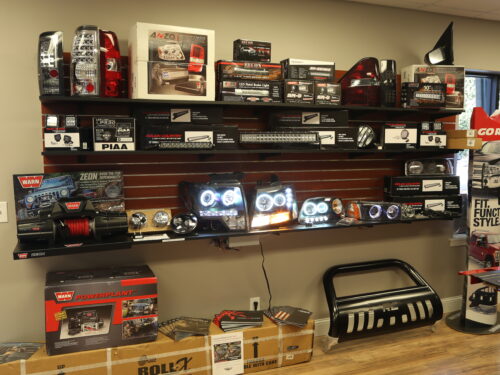 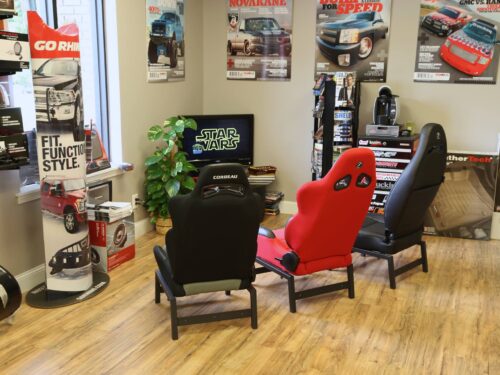 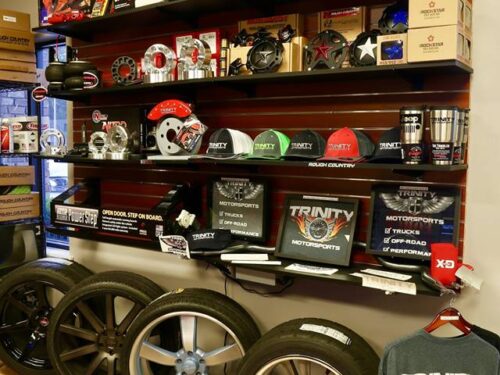 At Trinity Motorsports we don’t conform to traditional opinions of what a custom truck or car is. Rather, we listen to you, the owner, to hear exactly what you want and then make detailed suggestions of part choices and combinations for your budget. We believe a good custom(er) service is selling quality parts that actually work — a novel idea in the aftermarket world. We’ll leave the junk parts for the internet. Our attention to detail includes using state-of-the-art Hunter Engineering equipment to mount your custom wheels, balance your performance tires, and align your new suspension. You can rest assured that when your car or truck rolls out of our shop, it leaves as unique as you desire it to be, and it leaves right — every time. We have a fully-equipped shop so we can install everything we sell. No job is too big or too small for our highly-trained technicians.

Our specialties are late-model truck upgrades and late-model car performance. Here is a brief list of our services:

Trinity Motorsports is the premier custom truck and speed shop for Pooler, Savannah, Effingham, and surrounding areas. We specialize in Trucks, Off-road, and Performance. Our knowledgeable and experienced team is committed to helping you personalize your ride to stand out in a crowd, go faster than ever before, or work harder than you ever realized. Do you have a new truck and want a lift kit, wheels, and tires to make it look tough?… Welcome, and let us show you our vast selection of options. Or perhaps you want upgrades to ensure you have the fastest car at your office?… Come on in, we’ll provide you with a unique list of upgrades that can help your car run its absolute best.

Trinity is lead by two life-long gearheads — Dan Ward and Allan Settles. The duo cut their teeth selling auto parts to Pooler GA from 1996 to 2006. During that time, a large void was noticed for knowledgeable and qualified local mechanic shops to customize trucks and performance cars. Fast-forward to 2015, and we presented Trinity Motorsports — a shop designed to meet the needs of local residents looking to add their own style and personality to their ride.

Dan Ward
After living in Pooler for 23 years, Dan Ward spent 11 years living in Southern California working for Truckin magazine, the World’s Leading Truck Publication. Promoted to Editor-in-Chief in 2008, Dan traveled the country looking for the best trucks to showcase the latest in custom trends. During his tenure, Dan visited with SoCal and national shops to establish his idea of a true custom truck shop—one where the customer would be paramount, craftsmanship would be first-rate, and the surroundings would be both welcoming and unlike anything else Georgia has ever seen. An accomplished designer and builder in his own right, Dan and his team have partnered with Dodge, Ford, and GM to build show trucks for the annual SEMA show in Las Vegas, and he has multiple cover truck builds under his belt. Dan is an alumni of Savannah Christian Prep School and Armstrong Atlantic State University and is currently raising his two boys in Pooler with his wife of 12 years.

Allan Settles
Allan Settles was raised in Guyton and now works for a leading aerospace company, specializing in multi-physics system analysis. Having earned his Mechanical Engineering degree from Georgia Tech while building and racing one of the fastest street Mustangs in the area, Allan is a well-rounded master fabricator with an engineer’s mind. Performing nearly all of the work himself, that very Mustang was featured on the cover of a national Ford magazine.  Allan understands that if a part doesn’t currently exist, he can design and build it himself. His daily driver, a lowered and supercharged Tahoe, is a great example of his custom truck passion. Clean styling with a European flair makes Allan’s Tahoe stands out in the Chatham and Effingham area. His heavily-modified Lightning is also an under-the-radar custom with a laundry list of upgrades and performance goodies. If it’s loud and fast, Allan most likely knows how to make it faster and rowdier. Allan is an alumni of South Effingham High School and Georgia Institute of Technology and is currently raising his two daughters in Guyton with his wife of 14 years.

Trinity Motorsports is a locally family-owned business dedicated to Southeast Georgia residents. We were born here, grew up here, and understand the importance of taking care of our own. We enjoy getting to know our fellow car and truck enthusiasts and believe in buying local and supporting small businesses. Trinity Motorsports is committed to honoring the good Lord in all we do by operating the company in a manner consistent with biblical principles. The customer is our most valuable asset and we will treat you with respect, dignity, and constant appreciation. Both Dan and Allan attend Compassion Christian Church. 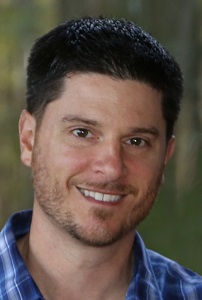 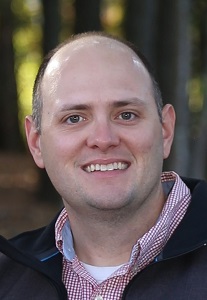 It all starts with proper engineering.

We’ve worked closely with Chevy, Dodge, and Ford to build custom vehicles, which have been showcased in major national magazines, websites, and auto events. We have been to OE assembly plants to see what is involved in making vehicle production, and seen firsthand several R&D facilities for wheels, tires, and aftermarket parts. Over the years, we’ve also been featured with countless cover truck builds, several cover car builds, and show trophy wins. We have been off-roading in Japan, Australia, Mexico, and all over the United States. In addition, we’ve raced coast-to-coast and won numerous events behind the wheels of our modified vehicles, and you may have even seen the taillights of our ’70 Mustang during our younger years of local street racing. We have high-octane fuel running through our veins and we share that passion with your custom build.